Use constraints
Other restrictions

Other constraints
Supplier partner is not able to guarantee the accuracy, update, integrity, completeness of data and in particular that they are free of errors or inaccuracies, including location, identification or qualification. No warranty as to the fitness of the data for a particular purpose is made by the supplier partner. Users use the data under their full responsibility, without recourse against the supplier partner whose liability can be incurred due to damage resulting directly or indirectly from the use of this data. In particular, it is up to users to decide, on their own responsibility: the opportunity to use the data; File compatibility of their computer systems; adequacy of the data to their needs; that they have sufficient competence to use the data. The partner supplier is in no way responsible for external elements including data analysis tools, hardware, software, networks ... used to view and / or process data. The user ensures verify the timeliness of the information provided is compatible with the use of it.

Statement
Six surveys of the subaerial beach excluding the surrounding reef were conducted between March and April 2004 using the GPS survey method. Surface coverage varied between a low of approx. 15,000 m2 and a high of 30,000 m2. The number of survey points varied between 272 and 543, corresponding to average distances between points within the range 3.8 - 4.4 m for the six surveys (μ = 4.08 m and μ = 0.25 m). To facilitate subsequent analyses and to allow comparisons with other surveys, those irregular point clouds were transformed into DEMs at a standard grid spacing of 0.5 m using triangle interpolation (function inpaint_nans in MATLAB), which uses known data points to calculate interpolated values at each grid node. Following preliminary testing, a threshold distance of 5 m was used to filter interpolated grid points judged too distant from a survey point to be reliably estimated.

Description
The dataset comprises 36 DEMs obtained using terrestrial laser-scanning (survey method TLS) spanning the period 2009-2019. TLS surveys start with the measurement of ground control points (GCPs) using RTK-GNSS for data georeferencing and verification. TLS scans were collected at 360° horizontally from different stations to achieve uniformly high resolution across the beach face and to reduce occlusions. Typically, two stations were used, positioned cross-shore centrally on the beach. In this situation, much of the subaerial beach is no further than 100 m from the laser head, resulting in a maximum ground sampling distance of approximately 0.1 m. A Riegl LMS-Z390i with a vertical scanning range of 80° and an angular resolution of 0.07° was used until 2014, progressively replaced by a VZ-400 of the same manufacturer allowing even smaller angular resolution at 0.04° and a vertical scanning range of 100°. Obtained point clouds were processed using the laser proprietary software RiSCAN PRO v1.7-2.0 for scan registration and geo-referencing (http://www.riegl.com/products/software-packages/riscan-pro/), and CloudCompare (http://www.cloudcompare.org/) for data interpolation into a DEM. The manufacturer stated positional accuracy and precision for the VZ-400 (LMS-Z390i) is 5(6) and 3(4) mm, respectively. This is an order of magnitude below the root-mean square errors (RMSE) we estimated using GCPs during processing, which show actual scan precisions of 0.026 ± 0.01 m (μ ± 1σ, n = 74).

Description
To facilitate reuse of the DEMs obtained using different survey methods, and to allow direct comparisons, consistent grids and a standard planimetric resolution of 0.5 m were chosen to fit the entire dataset. Where necessary, DEM resampling was performed using linear interpolation (function griddata in MATLAB). To reduce operators’ influence on decisions such as filtering outliers and filling gaps in initial data, also contributing to homogenising survey precision across the dataset, all DEMs were applied the same post-processing routine that consists in (i) using the mean elevation difference parameter to filter DEM elevations outside the range μ ± 5σ, with  and σ calculated for each surface grid cell using a three-by-three moving window, and (ii) reasonably filling missing data by averaging at least three known elevations. For the latter, search is done within circles centred on the missing DEM cell with radii increasing incrementally (increment = grid spacing) until at least three known values are found or until a size limit is attained (1 and 10 m over reef and sand, respectively). Reef/sand classification was performed using a combination of orthoimage and roughness analyses. As a final step, DEMs were assessed for systematic and random errors using multi-temporal ground truths, obtained by averaging available surveys over stable terrain, with eventual corrections applied through horizontal and vertical registrations. DEMs are provided in separate folders in geotiff (.tif), Arcgrid ASCII (.asc) and MATLAB (.mat) formats. They are accompanied by detailed metadata text files and figure plots summarising the results of post-processing and error evaluation. The following naming convention is used: yyyymmdd_Porsmilin_SurveyMethod_L93_IGN69_0.5, where yyyymmdd is the survey date and SurveyMethod can be either GPS, PHO or TLS.

Parent identifier
Data from : A long-term dataset of topography and nearshore bathymetry at the macrotidal pocket beach of Porsmilin, France 74ecce0a-e650-4c41-9970-97e4602f1cd8 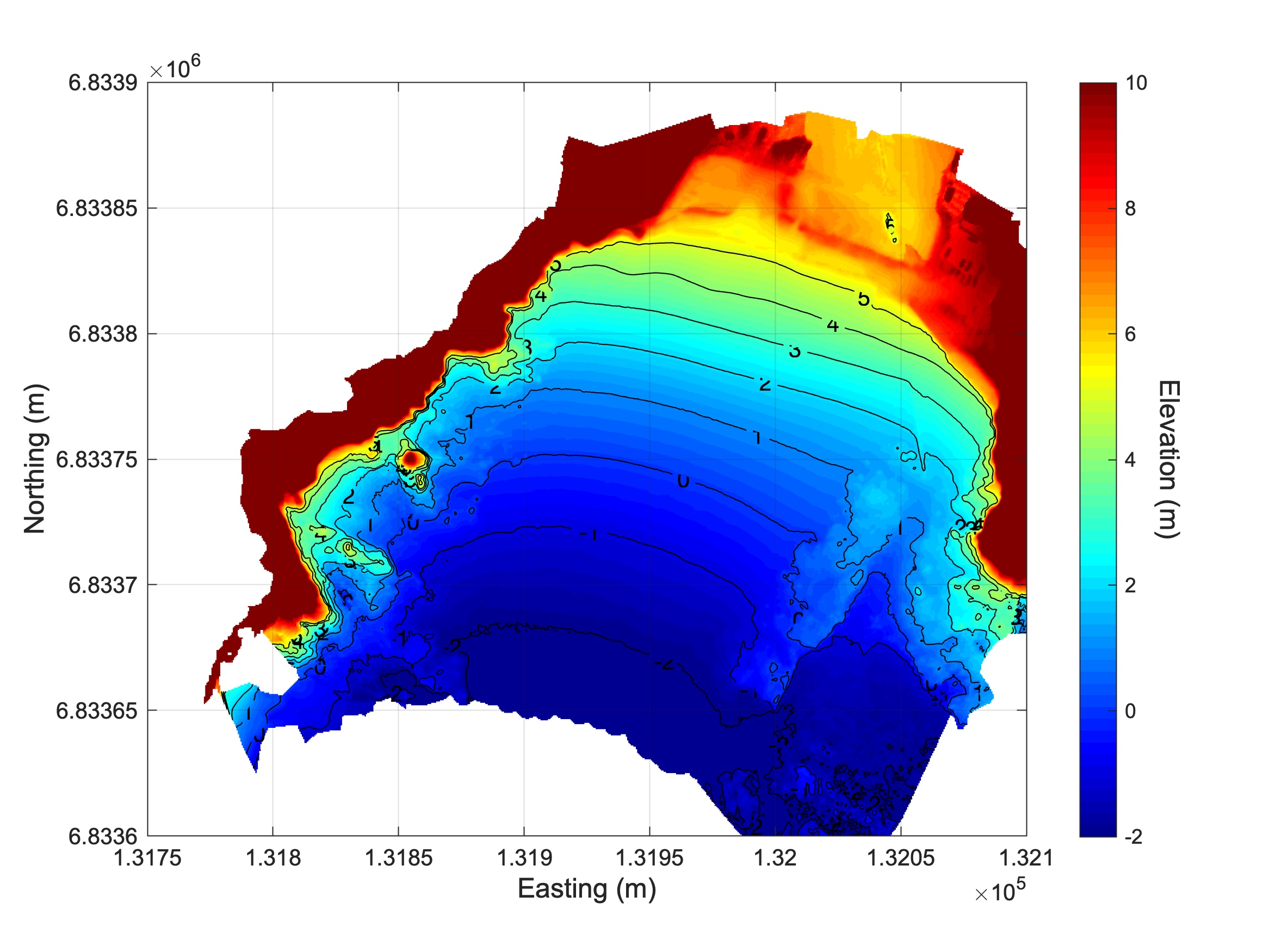